6,709 people are homeless in Ireland – these latest figures are the highest ever recorded. These include adults and children with their families.  The number of families becoming homeless has increased by over 40% since last year and one in three of those in emergency accommodation is a child.

Since November 2014 Campus Life Services in conjunction with the

UL Chaplaincy team have organised an Annual Sleep Out to raise much needed funds for homeless charities Focus Ireland  www.focusireland.ie and The Halfway Art House, Limerick.   www.halfwayarthouse.com   The Sleep Out this year took place in the Student Centre Courtyard from 21h00 on Thursday November 17th  until 09h.00 on Friday 18th.  It was a cold, damp night and although there was little sleep for participants, they were content that in some small way they were Sleeping Out for one night So Others Can Sleep In during the coldest months of the year.

As well as fund raising this event also heightened awareness on campus and in the Milford Parish Faith community around the issue of homelessness for families and individuals, at both local and national levels. 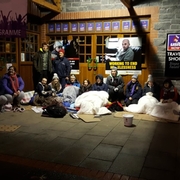 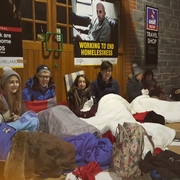