Last Wednesday, after getting my monthly travel pass and my UN badge, we headed for a packed Palais des Nations where the Human Rights Council of the UN was in assembly.  It meets for just 10 weeks in the year, 3 of which are in September. I have come to spend 10 days here in Geneva at the Human Rights Office of the Salesian Sisters (IIMA) to see how it all works. With me are a group of Salesian Sisters from other countries – Thailand, Philippines, Portugal, India and Cambodia.

Sr. MariaGrazia, the founder of the Human Rights Offices, IIMA (the congregation) and VIDES (volunteers), both of whom have consultative status at the HRC and can participate by making statements on certain topics under discussion at the assembly where 193 countries have an ambassador and other representatives.  Also they have organised ‘side events’ on particular topics, e.g. ‘Street children in India’, ‘Educational Continuity in Haiti after the Earthquake’, ‘Youth Empowerment’ etc. and they are planning another one on Youth Empowerment next March.  At these a report is given and discussion follows on the topic to a gathering in the UN building  of representatives (Sisters and co-workers) from all over the world as well as experts, stakeholders, ambassadors from relevant countries, high level government personnel etc.

The experience at the UN Human Rights Council sessions which we attended included topics on Older People, Enforced Disappearances, Contemporary Forms of Slavery, Indigenous Women, etc. One in which IIMA actually participated was as a member of a panel on Youth Empowerment.  These followed the same process – input by independent experts, comment by various states around the world and NGOs, then responses and final conclusions.   Contemporary Forms of Slavery include child labour, child soldiers, migrants, forced marriages….  However, as was stated, these forms of slavery have no national barriers, reminding us of the recent events in Co. Meath where men were falsely imprisoned, probably related to human trafficking. 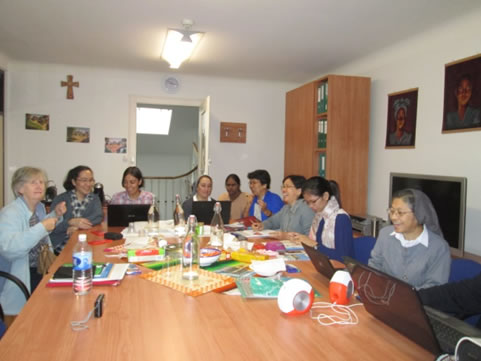 Our course includes training sessions on Universal Human Rights Instruments and Treaty Bodies, the Universal Periodic Reviews, briefings on the Right to Education, to Development and to Solidarity, etc. –  may not sound riveting but will give us a bit of background and understanding of the area.

Tomorrow’s session at the Human Rights Council includes the final adoption of the Universal Periodic Review for Ireland which was held in May.  It will be an interesting end to the days here.